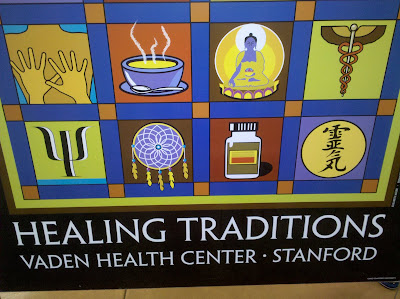 I remember seeing this sign at the entrance to the campus health center, and raising my eyebrows at the randomness and hypocrisy of it all, but only when Leon sent it over, did I start to realize how straight-up nonsensical it is.

I am, of course, referring to that dream catcher.

I would assume that we’re supposed to believe that these are all “Healing Traditions” supported by the health center–but honestly, can we put massage and chicken soup on the same level as Native spiritual traditions? And how is a dreamcatcher representative of healing/medicine in any Native community?

And as Leon pointed out: “not sure when Vaden has ever incorporated “Native healing traditions” in its services, much less, helped a Native out before…but apparently they like to say they do.” I don’t think anyone would argue that Vaden is anything less than a western-style medical facility, and I know the Native community has come up against some issues there, especially in the mental health services. Not exactly incorporating Native healing traditions.

I can just picture the meeting where they were developing this campaign: “so we’ve got the Eastern traditions represented with a buddah and some non descript written asian characters…we should throw something Native American up there. ideas?” “what about a dream catcher? that’s Indian!”

Overall, just a weird, silly, way for them to proclaim understanding and multiculturalism by relying on a ubiquitous stereotype.