AK note: This is Part II in discussing sweat lodges and non-Natives. For Part I and background,click here.

After that long lead in, lets break it down into some of the major issues at play here. I feel like I’m treading in a bit of dangerous water here, because admittedly sweats have not been a part of my spiritual tradition. If anyone has corrections or comments, please let me know, and know that it is not my intention to generalize, stereotype, or offend.

Sweat lodges are sacred. plain and simple. Not every tribe in the Americas has a tradition of sweat lodges, but many do. Each tribe has different origin stories surrounding the ceremonies and songs–hear that? songs, not chants!(one of my pet peeves)–that go along with them, so it is impossible for me to write a concise history. But realize that these ceremonies, when performed in their traditional cultural contexts, are religious practices. Equivalent to something, like, say, the act of receiving communion for Catholics (not an exact comparison, but work with me). Even non-Catholics respect the role of a priest and his position, and would never wander around selling “communion ceremonies” out of a backyard or garage, and moreover, people wouldn’t think that participating in one of these ceremonies was a replacement for the real thing.

Why, again, is it ok to appropriate sacred traditions from Native peoples?

There are many directions I could go with this discussion–the commodification of cultural practices (ie there are many “legit” Natives who sell their services as medicine men and women or lead sweats for money) , the fact that these men (and jezebel women) are participating in dangerous practices that when not understood or performed correctly can result in death and injury (see this case from Arizona last year where 4 people died in a sweat run by a white new-ager), or the fact that these non-Native “shamans” are making $500 an hour on an appropriated (well, stolen, really) practice while Natives live in some of the poorest communities in the US. All valid issues. But, for sake of space, I’ll focus on the Macho Man/oppressed women narrative.

Assumption One: Participating in a sweat is a way to “prove” your manliness, push yourself to the limit, put on a show of bravado

No. Again, I can’t speak for all tribes, but from my understanding, it is the exact opposite. A sweat is a time to be humble, not assert your strength. This description from a book written by a non-Native, called “The Lakota Ritual of the Sweat” (you can read part of it online here) shows just how unimportant machismo is to the process–though I hesitate to post it because I can’t vouch for the accuracy or if the community is ok with the publication: 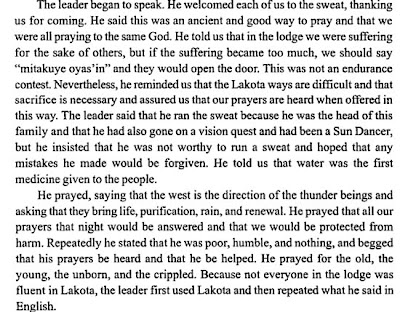 (I hope I’m not violating like 1200 copyright laws with that). Note the lines “This was not an endurance contest”, “insisted he was not worthy”, “repeatedly stated that he was poor, humble, and nothing”. Does this sound like the description from Details? not so much.


Assumption Two: Not allowing women who are menstruating into the sweat is a sign of patriarchy and sexism and is rooted in a deep disrespect of women.

No. Again, it is completely the opposite. Barbara Omaha, White Earth Ojibwe, says of the practice:

During her Moon time, a woman is going through her own natural purification process. While her body is going through this natural purification, she is also recharging her own body’s powers and energies, so it is a cleansing and restorative time for her. Because a woman’s power is being renewed during this process, she must stay away from all sacred ceremonies…A woman’s power during her moon time is so strong that it can draw the power away from the sacred Sweat Lodge, Sundance, and Pipe ceremonies. Her power during this time can interfere with the power in the Sacred Pipe, Eagle Feathers, and the food offered for the feasts following ceremony.

Women cannot participate not because they are “unclean” or as a sign of male power, it is because women have so much inherent power that they can interfere with the ceremony. Omaha also notes:

Men do not have their own natural purification and renewal process, therefore they must come to the Sweat Lodge ceremony for purification.

So, Jezebel women, it’s not a sign of disrespect, it’s a sign of ultimate respect. That’s the case with many practices outsiders deem sexist towards women in Native communities–standing outside the drum circle, for example–come out of a place of a deep understanding of the power and role of women in our communities.

In sum, cultural sensitivity: ur doin it rong.

For a great documentary on the subject, check out “White Shamans and Plastic Medicine Men”, which is actually on youtube, in three parts (but it appears part 3 is missing). Watch it. Inform yourself. Part 1 below: