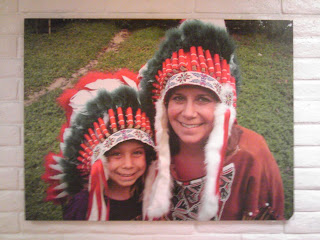 On Friday, I wrote about the Indian Guides program at my local YMCA. I decided to write a letter to the director of the YMCA, as a community member and former employee–telling them exactly why the practices employed by the Indian Guides are so hurtful. I’m posting it here, but I also sent it directly to the Executive Director. (If some of it sounds familiar, it’s because I paraphrased myself)

My name is Adrienne K., I am a life-long [city name] resident, and former camper and employee at [this YMCA]’s summer programs. I am also a member of the Cherokee Nation of Oklahoma, and care very deeply about issues concerning Native peoples. Recently, I went to use the fitness facilities at the Y, and came across the picture I’ve attached to this email, of a mother and child wearing feathered warbonnets. I was extremely taken aback, because I knew that in 2001 the national YMCA had reformed the “Indian Guides” program and done away with the Indian theme out of respect for Native American communities. I know that your YMCA is dedicated to serving the community and does fantastic work, but I was very hurt by the image, and respectfully request that it be removed, for several reasons.

First, wearing headdresses promotes the continuing stereotyping of Native peoples. The image of a warbonnet and warpaint wearing Indian is one that has been created and perpetuated by Hollywood and only bears minimal resemblance to traditional regalia of Plains tribes. It furthers the stereotype that Native peoples are one monolithic culture, when in fact there are 500+ distinct tribes, each with their own cultures. It also places Native people in the historic past, as something that cannot exist in modern society. We don’t walk around in ceremonial attire every day, but we still exist and are still Native.

In addition, headdresses, feathers, and warbonnets have deep spiritual significance. The wearing of feathers and warbonnets in Native communities is not a fashion choice. Eagle feathers are presented as symbols of honor and respect and have to be earned. Some communities give them to children when they become adults through special ceremonies, others present the feathers as a way of commemorating an act or event of deep significance. Warbonnets especially are reserved for respected figures of power.

I see the wearing of a fake feathered headdress as akin to dressing in blackface—it is the donning of a costume of a racial group that is not one’s own, based off of stereotyped caricatures that allow for the continuing subordination of Indian people.

I know that this mother and child would probably say that they are “honoring” Native Americans or “paying respect” to Indians, but the reality is that most Native people find no honor or respect in taking sacred objects out of context with no regard to their significance or origins.

I am further saddened, because in a minimal internet search, I found an abundance of evidence that [this] YMCA groups have not ceased in the use of the Indian theme at all. I would encourage you to watch this clip of a 2007 guide encampment, and try to picture how it feels, as a Native person, to watch your culture being misrepresented, mocked, and distorted beyond recognition.

There are so many aspects of this video that are deeply rooted in stereotypes and racism, including the use of the terms “medicine man” and “chief” to apply to leaders, but the use of our tribal names is especially disheartening. The names of our communities are not just labels that can be applied to a recreational group; they are representations of our living cultures, our histories, and our contemporary nations–not something that should be able to be manipulated to fulfill Indian fantasies. The fact that all of these “tribes” are represented by the same plains “costume” is also very upsetting.

In addition, I take issue with the process of giving “Indian names” that the video highlights–traditional names are sacred, and in most communities only certain elders or community members can be entrusted to give out names. The reality is that very few traditional names follow the extremely stereotypical “adjective + animal” format that the guides seem to favor.

Your mission statement states that your YMCA is “dedicated to improving the quality of human life and to helping all people realize their fullest potential as children of God through development of the spirit, mind and body.” I know that the acts of the Indian Guides are not done with malicious intent, but as it stands, it feels like Native American people are not included in your concepts of “human life” and “all people”. The Indian Guides practices demote Native peoples to a sub-human status, something that can be reduced to a series of stereotypes and inaccurate representations. The reality is that there are 13 Indian reservations in San Diego County, meaning there are far more Native residents in our community than you realize, and these acts marginalize them from the very community in which they live.

The national YMCA released guidelines for the “responsible use of the Indian theme”—but it is clear that these groups have not reviewed them or taken them to heart. The guidelines make a number of very good points, but it is still my opinion that there is no way to “responsibly” play Indian. The “guides” program is supposed to be about parent-child bonding, and I feel the program would actually be stronger if it weren’t rooted in racist acts.

I urge you to remove the photo in question, but it is also apparent that the entire guides program needs a substantive review. I encourage you to deeply think about the consequences of allowing this type of programming to continue.

I also write a blog called “Native Appropriations” where I discuss issues of cultural appropriation and representations of Native people. I have written about the guides program here, and will also be posting a copy of this letter. Please feel free to read other postings to gain an understanding of how pervasive these issues are and their continued effects on Native peoples.

Wado (thank you) for your time,
Adrienne K